231 citizens of Kazakhstan, including 156 children evacuated from Syria on May 7 and 9 - Tokayev 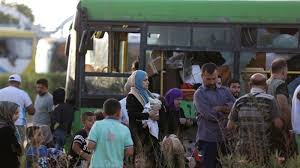 Astana. May 13. KazTAG - 231 citizens of Kazakhstan, including 156 children, have been evacuated from Syria on May 7 and 9, said Kassym-Jomart Tokayev, president of Kazakhstan.
"By my order 231 citizens of Kazakhstan including 156 children were evacuated from Syria on May 7 and 9, of them 18 are orphans. This scaled humanitarian action was a continuation of Zhusan operation which was successfully conducted by the order of first president of Kazakhstan-Elbasy Nursultan Nazarbayev in January this year," said Tokayev in the statement posted in Facebook by Berik Kurmangali, spokesman.
According to the president "rehabilitation measures have been performed in respect of all the evacuees by the state bodies and non-governmental organizations".
"People got medical, psychological and social assistance. We can talk about positive effect of this work. The women who returned in January of this year abandoned the radical past, got a job, and re-established ties with relatives. The children went to schools and kindergartens, " said Tokayev.
He believes that “the citizens of Kazakhstan who had left for the combat zones took this step under the influence of the destructive and false propaganda of terrorists".
“Now they are returning to Kazakhstan voluntarily, in the hope of starting a new life. Their children should not suffer in a foreign land and be responsible for the mistakes of their parents, " he said.