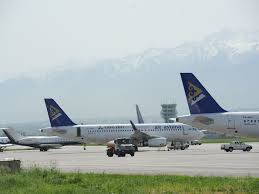 Astana. May 28. KazTAG - The British citizen was taken off the flight for a riot aboard London-Nur-Sultan aircraft, informed the press service of the Police Department in the Ministry of Internal Affairs of Kazakhstan.
“The representative of the Air Astana JSC reported to the duty officer of the linear police about the offender on board at London - Nur-Sultan flight. When checking the traffic, police installed a 24-year-old British citizen. The man was shot for violating the rules of conduct on the aircraft, for namely and verbally insulting passengers and flight attendants,” - the report said on Tuesday.
As stated by the transport police, the passenger did not act adequately on the flight attendant’s written warning.
In respect of the British, was drawn an administrative protocol on violation of the rules of conduct on an aircraft.

Laws of Kazakhstan disrupt freedom of speech in Kazakhstan - international observers Subsistence minimum was about T33 thousand in Kazakhstan in December Why we? We are also shocked!