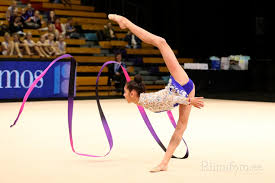 Astana. May 30. KazTAG - Kazakhstan gymnast won the "bronze" at the international tournament in Israel, informed the press service of the National Olympic Committee of Kazakhstan.
“Holone, the city of Izrael, has held an international rhythmic gymnastics tournament. Kazakhstan woman Roza Abitova took 3rd place. As a result of performance Abitova scored 70.25 points. She also became the third in exercises with a mace, a ball and a ribbon,” - the message says.
As reported, the first place won Daria Pridannikova from Russia - 77.1 points, 2nd place was taken by Tatyana Volozanina from Bulgaria - 75.8.