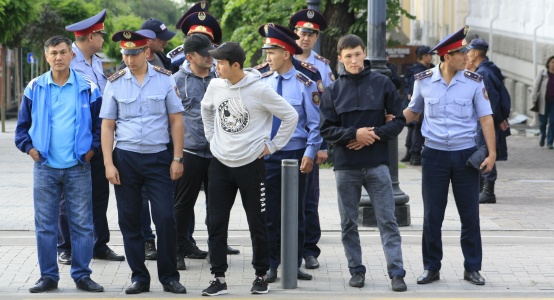 Astana. June 18. KazTAG - Approximately 4000 people have been detained in the time of protest actions in Kazakhstan, said Yerlan Turgumbayev, Minister of Interior Affairs.
"Unsanctioned protest actions were held on June 9,10,11, 12 and 13 in Kazakhstan. Mainly they were held in Nur-Sultan and Almaty. Kazakhstani police did not use gas, rubber clubs or any other special appliances; they used only physical strengths to localize the conflicts. Approximately 4000 people were arrested, 3000 of them were released until 15.00, 688 were attracted to administrative arrest, 305-  were attracted to administrative fine, in compliance with the administrative code about 1000 people were attracted to responsibility," he said.
He added that more than 300 police officers suffered corporal injuries, six of them were hospitalized.
"As for beating people (...) if they suffered corporal injuries, the President assigned the General Prosecutor's Office to check the facts, if people believe they were illegally detained or suffered corporal injuries, they can apply to the General Prosecutor's Office which will give the legal estimation," he resumed.