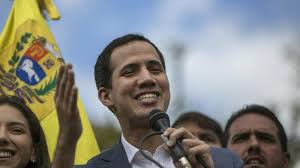 Almaty. February 1. KazTAG - The European Parliament recognised on Thursday Juan Guaidó as the legitimate interim President of Venezuela, in accordance with the Venezuelan Constitution, reports the site of the European Parliament.
MEPs urged EU Foreign Policy Chief Federica Mogherini and member states to also recognise Guaidó “as the only legitimate interim president of the country until new free, transparent and credible presidential elections can be called in order to restore democracy”.
In a resolution, adopted with 439 votes to 104 and 88 abstentions, they reiterate their full support to the National Assembly, Venezuela’s only legitimate democratic body whose powers need to be restored and respected, including the rights and safety of its members.
Following the recognition of Juan Guaidó, the EU and its member states should also recognise representatives appointed by the legitimate authorities, adds the Chamber.