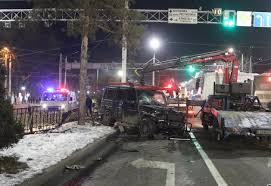 Almaty. February 15. KazTAG - Ilyas Kar, Gelandewagen driver, committing a fatal traffic accident on the intersection of Abay ave. and Seifullin ave. in Almaty, surrendered to police himself.
"The local police service was conducting the search. I was invited on December 30. There was a lawyer and I. Kar when I came. He said: "We came with a confession". Then I issued the detention report and we went to the scene of the accident, ” said the inquiry officer who investigated the case.
He also noted that the defendant was at the scene of the accident for some time, and then escaped.
As it was reported, I. Kar, driving Mercedes Benz G55 violated traffic rules and collided with Mitsubishi Galant on December 29 2018.
Mitsubishi driver and two passengers died in the accident, one passenger was hospitalized with numerous traumas.

Ashyq service now available in Kaspi.kz app Almost 1.5 thousand people in Kazakhstan fell ill after vaccination against coronavirus Why we? We are also shocked!