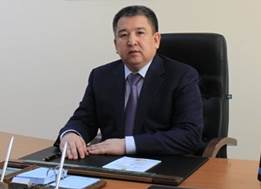 Astana. June 6. KazTAG - Bakhytbek Imanaliev has lost his position as a head of the committee on state material reserves of the Ministry of Digital Development, Defense and Aerospace Industry, informed the press service of the Prime Minister of Kazakhstan.
On April 4, it was found out that the head of the committee on state reserves was arrested on suspicion of abuse of office for organizing the sale of poor quality meat products in 2018 to bona fide purchasers, causing damage to their interests in excess of KZT600 million”. According to investigators, in 2015, these products were delivered to the committee by one of the producers of NKR, causing damage to the state in the amount of KZT1.8 billion.
Imanaliev held the post of head of the state reserves committee since 2016.

Ait Namaz may be cancelled in mosques of Kazakhstan for Kurban- Ait in case of quarantine extension Nine doctors died of bilateral pneumonia in Shymkent Why we? We are also shocked!