Mothers of many children collected by Akorda and require a meeting with Tokayev, Nazarbayev and Mamin 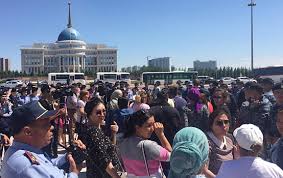 Astana. June 3. KazTAG - Sogdiana Idrisova. Mothers of many children collected by Akorda and demand a meeting with the President of Kazakhstan Kasym-Zhomart Tokayev, the first President of the country Nursultan Nazarbayev, and the Prime Minister Askar Mamin.
Dozens of women collected by the walls of Akorda, then moved to the site between the government building and the parliament.
Mothers of many children require the solution of the accumulated problems, the fulfillment of earlier given promises concerning housing.
Bakhyt Sultanov, Akim of Nur-Sultan, Deputy Prime Minister Gulshara Abdykalikova, as well as Minister of Labor and Social Protection of the Population Berdybek Saparbayev arrived at the meeting. They suggested that women individually go to the room to discuss each of the problems individually, to which mothers of many children refused, stressing that they would not go anywhere until Tokaev, Nazarbayev or Mamin came to them.
The authorities assure that the problems are being solved in stages. However, women themselves refute these statements, emphasizing that problems have not yet been resolved.