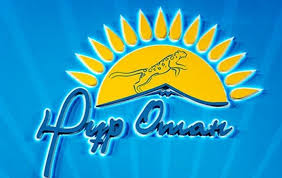 Astana. February 27. KazTAG - The name of Nur Otan party in the Kazakh language will be written in the Latin alphabet, said Maulen Ashimbayev, First Deputy Chairman of the party.
"In the past five years in compliance with the legislative updates and new experience we have to bring some regulations in the statute of the party. Due to transfer of Kazakh alphabet into the Latin graphics we propose to write the party's name in the state language with the Latin letters," he said.