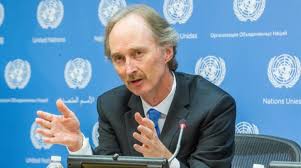 Almaty. January 8. KazTAG - The United Nations’ new special envoy for Syria, Geir Pedersen, took office on Monday, the press service of the United Nations Special Envoy for Syria said in a statement.
“The new UN Special Envoy for Syria, Geir O. Pedersen, took up his functions today”, the statement on Twitter reads. In turn, Pedersen said that he was looking forward to starting his work on the post.
“Honoured to assume duties in service of Syrian people and their aspirations for peace. As directed by SG, will provide good offices, work for peaceful solution and implementation of SCR2254. Looking forward to consulting broadly with concerned parties within and outside Syria,” Pedersen was quoted as saying.
The 63-year-old Norwegian is a veteran diplomat who has served in both UN and government roles, most recently as Norway’s ambassador to China.
Former UN Special Envoy for Syria Staffan de Mistura said in October he would step down by the end of November but had to stay a bit longer. His career of four years includes mediating a way out of the seven-year Syrian war.

Ministry of Agriculture finds reason in meat prices growth in mass cattle export in Kazakhstan Eight years old boy died in Almaty region falling into open well with water Why we? We are also shocked!