Norwegian crossing Balkhash on skies: I have found a lake on maps in search for inspiration 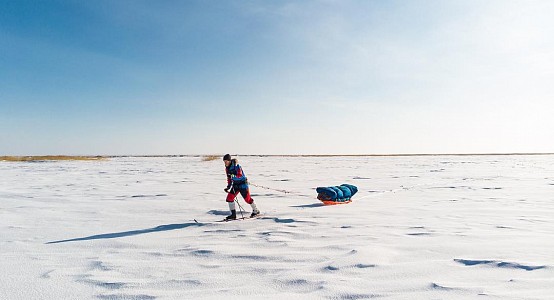 Almaty. March 15. KazTAG - William Byholt, Norwegian traveler, who crossed the Balkhash Lake on skies said he had found the Kazakhstani lake on a map "in search for inspiration".
"It is a very special trip for me, first I started studying I half a year ago, I just looked on the map in search for inspiration and saw Kazakhstan on the map and the Balkhash lake, which is huge, I wanted to research it and I came here to cross the lake," he said at the press-conference.
He said he realized that nobody crossed the lake and there was no information on it.
"Luckily I got acquainted with the Kazakh geographic community, they helped me with the search of the information. It was a very interesting experience, there were no similar days. It is not just a lake. I saw the traces of wolves, I met fishermen. The hardest thing was that I got sick on the way, I had to take antibiotics. The expedition took 23 days. This trip was much harder as I had no information, in other trips I had the information and many people had travelled before," he added.
Byholt has been travelling since 2010 and has attended 79 states. He is interested in poorly explored destinations.