Oil prices could crash by $30 if China buys Iranian crude 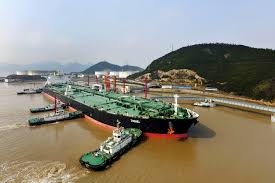 Almaty. August 5. KazTAG -  Crude oil prices could sink by as much as $30 a barrel if China decides to buy Iranian crude oil in retaliation to the latest U.S. tariff measures, according to Bank of America Merrill Lynch, reports CNBC.
“While we retain our $60 a barrel Brent forecast for next year, we admit that a Chinese decision to reinitiate Iran crude purchases could send oil prices into a tailspin,” a BofA Merrill Lynch Global Research report said Friday, warning that prices could sink by as much as $20-30 a barrel in that scenario.
The Chinese Ministry of Commerce has threatened countermeasures after President Donald Trump threatened to slap a 10% tariff on $300 billion dollars of Chinese goods. The decision Thursday floored oil markets and sent crude plunging 8% — the most in four years.
Analysts warn that “oil volatility is set to rise again” as markets wait for a Chinese response to the latest US tariff threat, which could include purchasing Iranian oil.
“This decision would both undermine US foreign policy and cushion the negative terms-of-trade effects on the Chinese economy of rising US tariffs,” the report added.
Shipments of Iranian oil fell below 550,000 b/d (barrels per day) in June from about 875,000 b/d in May and about 2.5 million b/d in June 2018, according to data from S&P Global Platts. Roughly half of Iran’s exports were shipped to China in June and July, according to the firm.
But a Chinese decision to purchase Iranian oil in a further defiance of U.S. sanctions could act as a double edged sword, according to other analysts.
“Iran would welcome any opportunity to increase its production whether or not it breaches the terms of the U.S. sanctions, but the strategy there would introduce China to a partner over which it doesn’t have an enormous amount of control,” Edward Bell, Director of Commodities Research at Emirates NBD told CNBC’s “Capital Connection.”
“Don’t forget there are other producers that would also be targeting that trade with China, so for instance you could see Iraq or Saudi Arabia step in and try and discount the volumes that they would be exporting to China as a way to circumvent Iran getting that extra market share,” he added.
Crude oil prices slumped further on Monday, as traders focused on a deteriorating demand outlook.
Analysts at BofA Merrill Lynch said the latest round of US tariffs could reduce global oil demand by 250,000-500,000 barrels per day, adding to worries about a demand slowdown that is challenging the fundamentals for crude.
“The kind of deterioration in global trade volumes that we’ve seen this year does mathematically lead into lower demand for crude oil,” Bell added.
“If that carries on through the end of 2019 or perhaps even 2020 as we enter the firm end of the US election cycle when Trump is likely to want to maintain that hard stance on China, then it could be a very difficult barrier for crude to try and break through some of those demand concerns.”
Brent crude was trading at $60.94 early Monday, down around 1.5%, while WTI traded at $54.81, again slipping around 1.5% for the session.