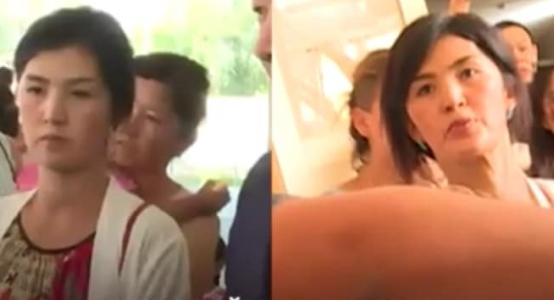 Almaty. July 23. KazTAG - One of the attackers on the journalists in Almaty introduced herself as a representative of akimat, said Asem Zhapisheva, journalist.
"Akzhol Akhmetova is her name, first at one arrangement she acted as an assistant of akim of Alatau district Shakhmerden Ryspayev and called the public to listen to him, a week after she attacked the journalists of Azattyq. This is her page https://www.facebook.com/profile.php?id=100010861841606 and here is another page of hers https://www.facebook.com/profile.php?id=100010327715442 . In fact nurbots (positive commentators of the official messages of fake accounts -KazTAG) often have two pages, because it is easier for administration," she wrote in the page in the social networks.
She has also found two pages of Akhmetova's husband.
"Here is the page of her husband https://www.facebook.com/profile.php?id=100010026766419 , it is interesting because it is also used for nurbot aims, and here is another page https://www.facebook.com/profile.php?id=100005996322610. Further we can look through her friends, ties and etc. It must be hard to raise four children on a salary of a mechanic,  security guard, for this reason they do such things. Thieves hire those whom they rob, in order to attack those who say that they are thieves," wrote the journalist.
Zhapisheva said in order to find other attacking women she needs "at least a screenshot of good quality".
"The posted pictures are of bad quality. I am busy now, the computer does not work properly. Send me the screenshots in the private message or in the comments," she resumed.