People in Kazakhstan can watch Lunar Eclipse on June 5 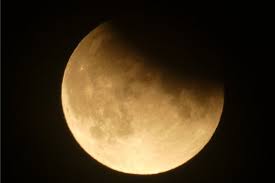 Petropavlovsk. June 4. KazTAG - People in Kazakhstan will be able to watch the lunar Eclipse on June 5.
"People in Kazakhstan can observe the Lunar Eclipse on Saturday night," said Andrey Solodovnik, professor at the North Kazakhstan University named after M. Kozybayev.
According to him, on June 5, there will be another full moon with a penumbra Lunar Eclipse.
"This time the residents of almost all of Eurasia (except for the inhabitants of the far North) will be able to see the phenomenon," the scientist said.
He said that the Moon, moving from West to East, will pass through the Northern part of the earth's penumbra. The total duration of the penumbra Eclipse will be more than three hours.
"The phenomenon will begin at 23.43 on June 5 (the Moon will be located in the South-Southeast at an altitude of 10 degrees), and will end at 03.06 (on June 6, the Moon will be visible in the South-southwest at an altitude of about 10 degrees). In this case, the maximum immersion in penumbra will occur at 01.25. This will also be the moment of the full moon," said the astronomer.