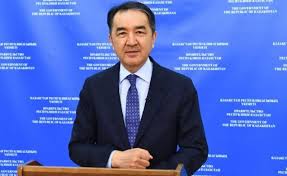 Astana. February 22. KazTAG -Bakhytzhan Sagintayev, ex prime minister of Kazakhstan, has thanked Nursultan Nazarbayev, President of Kazakhstan, for "high trust" rendered to him, reports the Cabinet's office.
"I'd like to thank Nursultan Nazarbayev, President of Kazakhstan, for high trust rendered to me in these two and a half years of work on the post of the prime minister of the state," he said in a video message on Friday.
The statement was made following resignation of the Cabinet.
"Today the Government has resigned. Yelbasy- founder of our state always takes decision based on the interests of the state and people,  being focused  on welfare of all the people of the country. Creating a state is a hard work, and the creation of such a state as our country in such a short historical period without internal upheavals and conflicts deserves respect and admiration throughout the world. Our president is the great creator of our time. Only with Elbasy, the people of Kazakhstan connect their present and future," he said.
As it was reported, N. Nazarbayev declared resignation of the Government on February 21.