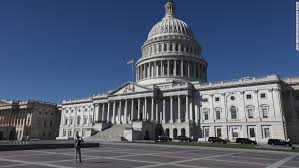 Almaty. January 11. KazTAG - Washington is at a standstill, as US President Donald Trump and Democrats feud over his demand to include $5.7bn (£4.5bn) for a border wall in a new spending bill, reports BBC.
The fight has closed parts of federal agencies since 21 December and is on track to be the longest government shutdown in US history.
Food inspections have halted. Listings of new companies are on hold. Mortgage approvals have been delayed and the release of certain economic data has been suspended.
But how much of a difference does the upheaval make to the economy?
For those outraged by the impasse, the answer may be unsatisfying because, at least for now, it appears to be - not much.
Economists estimate that the shutdown is likely to shave between about 0.04% and 0.07% of gross domestic product (GDP) off economic growth per week - an average of just over $1bn a week.
That is far less than estimated losses of more than $20bn incurred during the 16-day shutdown in 2013, which affected much more of the government.
"As long as this shutdown is relatively short, these impacts are going to be fairly modest," says Joel Prakken, chief US economist for Macroeconomic Advisors by IHS Markit.