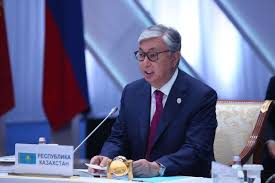 Astana. May 29. KazTAG - The meeting of the Supreme Eurasian Economic Council in a narrow composition was held in Nur-Sultan, reported the press service of the head of state.
“The meeting was attended by President of Kazakhstan Kasym-Zhomart Tokayev, the first President of the Republic of Kazakhstan - Elbasy Nursultan Nazarbayev, Presidents of the Republic of Belarus Alexander Lukashenko, the Kyrgyz Republic Sooronbay Jeenbekov, the Russian Federation Vladimir Putin, Prime Minister of the Republic of Armenia Nikol Pashinyan, Chairman of the EEC Board Tigran Sargsyan", - reported in Akorda on Wednesday.
The head of state welcomed the presents and expressed his gratitude to Russian President Vladimir Putin for the proposal to assign Nazarbayev the title of “Honorary Chairman of the Supreme Eurasian Economic Council”.
“At the end of the welcoming speech, the President of Kazakhstan gave a high assessment to the past chairmanship of the Russian Federation in the EAEU and expressed confidence that the chairmanship of the Republic of Armenia will contribute to the further development of the international organization. During the meeting, the heads of states exchanged views on topical issues of activities and prospects for further development of the EAEU. Also discussed the main guidelines for macroeconomic policy for 2019-2020,” - the message says.