Tokayev about visit to Kosshy: I promised to build a school 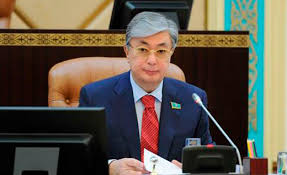 Astana. April 22. KazTAG - President of Kazakhstan Kassym-Jomart Tokayev has promised to build a new school in the village of Kosshy.
"I visited Kosshy village in the Akmola region where I checked the condition of engineering-transport infrastructure. I checked the intake station; I was informed about water and energy supply, road construction. I indicated divergence between the official and factual size of population in the village, which makes social provision complicated. I ordered to resolve the problems of three shifts schools. I promised to build a new school," he wrote in Twitter.
He said he talked to the pupils and teachers of the school N1 named after Koshkarbayev. "I thanked the teachers for their work," he resumed.

Citizens of China represent the most numerous group of foreign workers in Kazakhstan Two arrested following soldier escape with weapons from military unit in Shymkent Why we? We are also shocked!