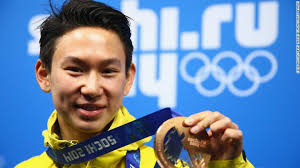 Almaty. January 3. KazTAG - Two defendants on the case of murder of Denis Ten, famous Kazakhstani figure skater, have not admitted their fault, one of them has admitted his fault partly.
"I admit the theft, but I do not admit the murder. I did not have such intentions. As for the third episode, I took the mirrors- that is true, but I had no plans to kill. I did not cause any health harm ( to D.Ten-KazTAG)," said Arman Kudaibergenov, defendant, in the court's room.
Second suspect Nuraly Kuyasov did not admit any fault.
"I do not admit the fault, I did not kill, I did not steal," he said.
Zhanar Tolybayeva, third defendant, asked the court to requalify the incriminated article.
"I did not know I was going on crime. I ask to change the article, I did not see the stabs. I do not admit the fault," she said.