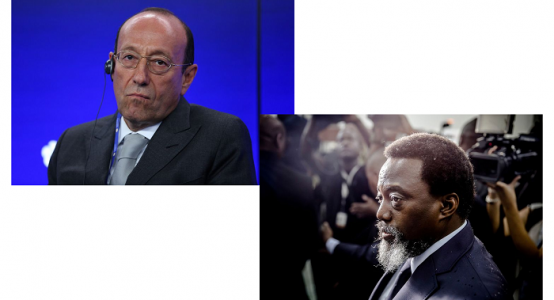 Almaty. January 13. KazTAG - U.K. fraud prosecutors demanded an Israeli billionaire’s diary as they tried to establish whether there had been contact between him and former President of Democratic Republic of Congo Joseph Kabila as part of one of their largest bribery investigations, a lawyer for the Serious Fraud Office said at a London trial, reports Bloomberg.
SFO attorney Jonathan Hall described the request at the start of the two-day trial against Anna Machkevitch, 37, who’s accused of failing to produce some of the documents concerning her mining magnate father, Alexander, within the SFO’s time-frame.
The case is an off-shoot of the SFO’s seven-year investigation into Eurasian Natural Resources Corp., a mining company owned by Machkevitch senior and two billionaire partners, collectively known as the trio. Hall said the SFO is investigating how ENRC acquired valuable mineral assets in Congo, and its order included correspondence from Machkevitch to the “President” and “Katumba,” references to Kabila and senior adviser Augustin Katumba Mwanke, who died in a 2012 airplane crash. The SFO established that “there was not material pertinent to Katumba,” Colin Nott, a lawyer for Anna Machkevitch, said outside of court.
In November 2018, the SFO ordered that Alexander Machkevitch’s notes as well as calendar and diary entries and other documents over a 10-year period bve turned over by his daughter, who the SFO believed helped manage them, according to Hall. She denies any wrongdoing.
With mines in Kazakhstan and Congo, ENRC rose to become a FTSE 100 company on the London Stock Exchange, but the SFO probe led to its share price dropping substantially. Machkevitch and his partners then took the firm private again. They have since shifted their mining operations into another company called Eurasian Resources Group.
Machkevitch is a suspect in the case and the SFO has interviewed him, Hall said. While the alleged violations took place between 2010 and 2012, the SFO asked for records from 2008 until now, so it could look at possible ongoing contact between suspected conspirators, Hall said. Anna Machkevitch isn’t a suspect in the corruption probe and hasn’t been interviewed.
Earlier, Judge John Zani dismissed a request by the defendant to stay the case. Anna Machkevitch’s lawyer had argued that the SFO’s case was biased and only designed to score a point in the context of the corruption investigation, arguments the SFO denied.
Anna Machkevitch’s attorney David Whittaker argued that his client wanted to comply with the SFO’s order and had produced much of the material as soon as possible. Another of her lawyers had decided not to submit all the documents requested, as they fell outside of a date range he thought was reasonable, Whittaker said. As soon as Machkevitch was informed of the charge against her, she hired a third lawyer who immediately sent the remaining documents, Whittaker said.
Hall said it was “unthinkable” that Machkevitch’s lawyer had withheld some of the files without her consent.
Failing to comply with an SFO order of this kind carries a maximum six-month prison sentence or a fine. Zani is due to deliver his judgment on Jan. 30.