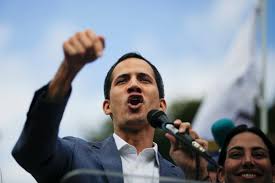 Almaty. February 4. KazTAG - General Francisco Esteban Yanez Rodriguez from the Venezuelan air force has recognized opposition leader Juan Guaido as the country’s interim president, Venezuela’s daily El Nacional reported on Saturday, reports TASS.
"Today, I state with the pride of a patriot and democrat that [I] recognize Deputy Juan Guaido as acting president of the Bolivarian Republic of Venezuela and therefore, I declare readiness to obey his orders," the general said in a video streamed by the newspaper.
Gen. Yanez lashed out at current President Nicolas Maduro as "a dictator" and assured that 90% of Venezuela’s armed forces were not supporting him.
"I ask my comrades-in-arms not to turn their back on the people of Venezuela and not to suppress them," the general added.
His video address had been circulated a few hours before both supporters and protesters were scheduled to hit the streets in Caracas.
On January 23, the leader of Venezuela’s opposition Juan Guaido, whose appointment as parliamentary speaker had been annulled by the Supreme Court two days before that, declared himself as interim president. On the same day, the United States recognized him as acting head of state. So did the Lima Group countries (excluding Mexico), the Organization of American States, and a number of other countries. On January 29, Washington imposed sanctions on Venezuela’s oil company PDVSA and put some of Venezuela’s assets in US banks under Guaido’s control.
Some European countries, including Britain, Germany, Spain, the Netherlands and France on January 26 said they would recognize Guaido as interim president, if Maduro refused to call an early election within eight days. Russia, Belarus, Bolivia, Iran, China, Cuba, Nicaragua, El Salvador and Turkey stood up for Maduro’s support. The UN secretary-general urged a dialogue for resolving the crisis.