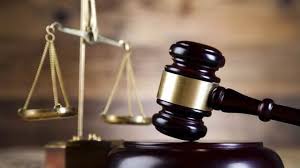 Atyrau. January 25. KazTAG - Verdict has been given to ex officials of police in Atyrau who were taking bribes from migrant workers.
"The court N2 of Atyrau has given the verdict to ex deputy head of department of interior affairs of Atyrau, colonel Kairalapov and senior inspector of migration police, mayor  Maukenov for a bribe taking. Kairalapov was adjudged guilty under point 4 part 3 article 366 (bribe taking) and fined 1.782 mln tenge, Maukenov was also adjudged guilty under the article, he has been fined 5.696 mln tenge”, reports the Atyrau regional court.
Both policemen were deprived of the ranks and the right to take posts in the state service. They were charged systematic bribe taking for accelerated provision of labour permits.