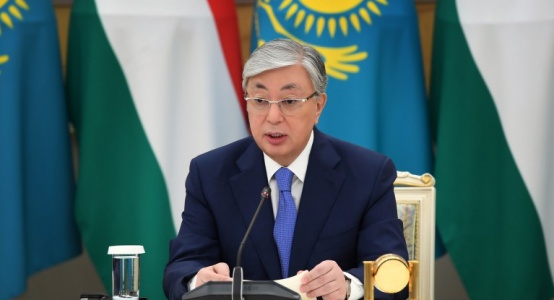 Astana. April 25. KazTAG - We consider Hungary as a key partner in Central and Eastern Europe and the EU, said Kassym-Jomart Tokayev, president of Kazakhstan.
"Hungary has become the first state in Central Europe which signed a declaration on strategic partnership with Kazakhstan. It confirms the high level of mutual understanding between people, aspiration of Nur-Sultan and Budapest to strengthen cooperation. We consider Hungary as a key partner in Central and Eastern Europe and in the European Union," said Tokayev.
He marked that the official visit of Viktor Orban to Kazakhstan opens a new page in the history of Kazakhstani-Hungarian relations. He said that organization of the 5th anniversary of strategic partnership between the states is a symbolic event.
He added that along with political and economic interests the states are tied with common historical roots.
"First president of Kazakhstan Nursultan Nazarbayev was elected as an honorary leader of the "Union of nomads of Hungary" which unites over 100 000 descendants of the nomads of the Great steppe. It is one of the evidences of recognition of contribution of Elbasy in the development of bilateral relations," said Tokayev.
The president of Kazakhstan told reporters that during the talks, priority areas for cooperation in the political, trade, economic, cultural and humanitarian fields have been outlined. Special attention was paid to the work of the strategic council and the intergovernmental commission on economic cooperation.
“On April 29-30, Mihaly Varga, deputy prime minister - minister of finance of Hungary, and a business delegation are expected to arrive in Nur-Sultan for the 3rd meeting of the strategic council. We hope that the meeting will further expand our trade, economic and investment partnership, ” said Tokayev.