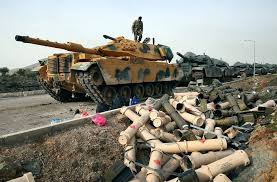 Almaty. September 13. KazTAG - Sergey Lavrov, Foreign Minister of Russia, has declared the end of war in Syria, reports Trud newspaper.
"The war in Syria is really over. The state is gradually turning back to balanced, peaceful life. There are still separate tension sources only on the territories uncontrolled by the Syrian Government, such as Idlib and Eastern bank of Efrat river," said Lavrov.
In his words, "provision of complex humanitarian aid to Syria and promotion of political process in regulation of crisis for achievement of reliable and long-term stabilization in the state and in the Near East region are the primary tasks".
"From the very beginning of the armed conflict in Syria, Russia has been advocating political-diplomatic ways for its settlement; it supported 2254 SC UN resolution which contained a "road map" for regulation. In addition, by the initiative of Russia and two other states- guarantors of the Astana format-  Iran and Turkey- a congress of Syrian national dialogue was held in Sochi in January 2018 whose participants resolved to create the Constitutional committee," said the Foreign Minister of Russia.